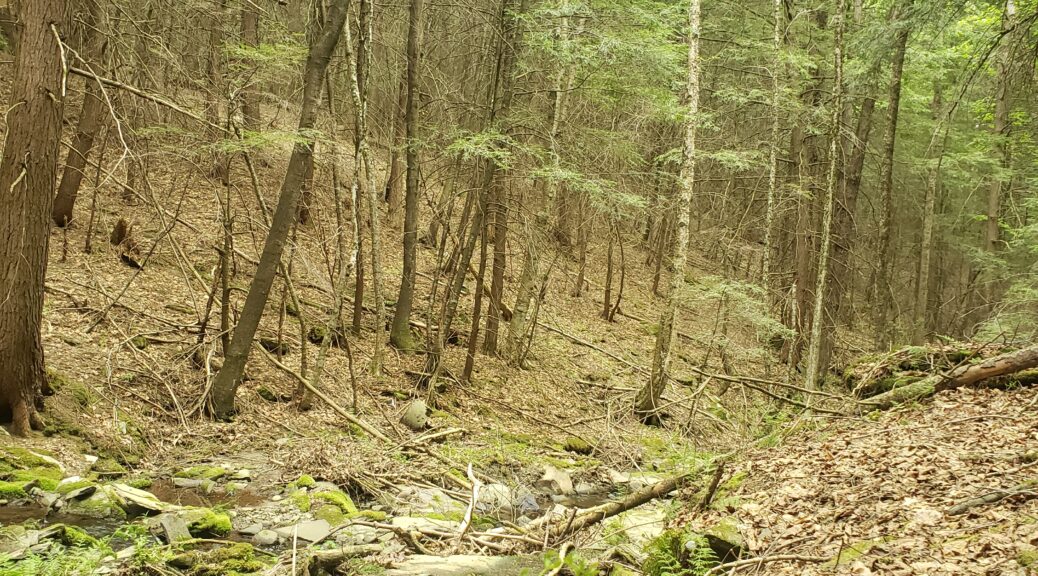 I went to look at land upstate today. Land upstate is cheap. So cheap. And I’m comparing it to a) Manhattan standards, closely followed by b) Indian standards.

And then there is land upstate ??‍♀️

Sure land is cheap upstate. But the downside is that you also don’t get cellphone service up there. Especially deep in the mountains. So if you were to buy land up there, you would need to do a ton of work to get the land acquainted with the present day world (utilities, water, septic etc).

So this property that I was looking at – I wanted to see the stream that’s on the property, so I hiked the short slope down to the stream that looked more like a brook. I’m sure the “brook” comes out in full force when the mountains unleash the floodgates.

I’m well acquainted with the flash floods that can result from a sudden summer downpour in these mountains, having been caught off-guard while on a 6 mile/1200 ft elevation hike last year (joy).

The realtor had left before I decided to make my way down the slope. I realized once I got down to the stream that there was no cellphone service in the area. I kinda knew there LIKELY was no service, but it wasn’t until I got down that I realized, even though I wasn’t far from the road, and there was another house maybe .2 miles away, had I slipped and hurt myself, it probably would have been a bad situation. I don’t think my voice would have carried over to the neighboring house if I yelled.

As I listened to the soft and calming gush of water, blending in with the rustle of the wind in the trees, I wondered if maybe I should have come out here with a friend. I quickly dismissed the idea. I’m not sure who I’d have brought along with me. Or to be more precise, I can’t think of anyone who’d be into driving around all day looking at borderline inhospitable land.

As much as people give me credit for being an extrovert, and as much as I love to plan group events, and play an organizer role in several groups, I actually spend quite a bit of time by myself, mostly exploring ideas that formulate in my head.

This particular expedition is based on a muse that’s been running wild in my head for over a year now. I’m giving it time for it to settle, while I continue on with my research. I’d rather not get into the details of said muse, because like most muses, there is a chance this might shrivel and die.

But going back to all the empty land though…. so much empty land. And yet, in certain parts of the world, people live on top of each other because they’re constrained by the boundaries specified by their countries, when all they probably want is a bit of land to live on. I realize I might have oversimplified the economics of it all.

Yet I dream of a utopia where there are no boundaries. Where human beings are human beings. Free to roam. Free to spread and stretch out all over the world. The entire world. Free of religion. Where the only religion is empathy.