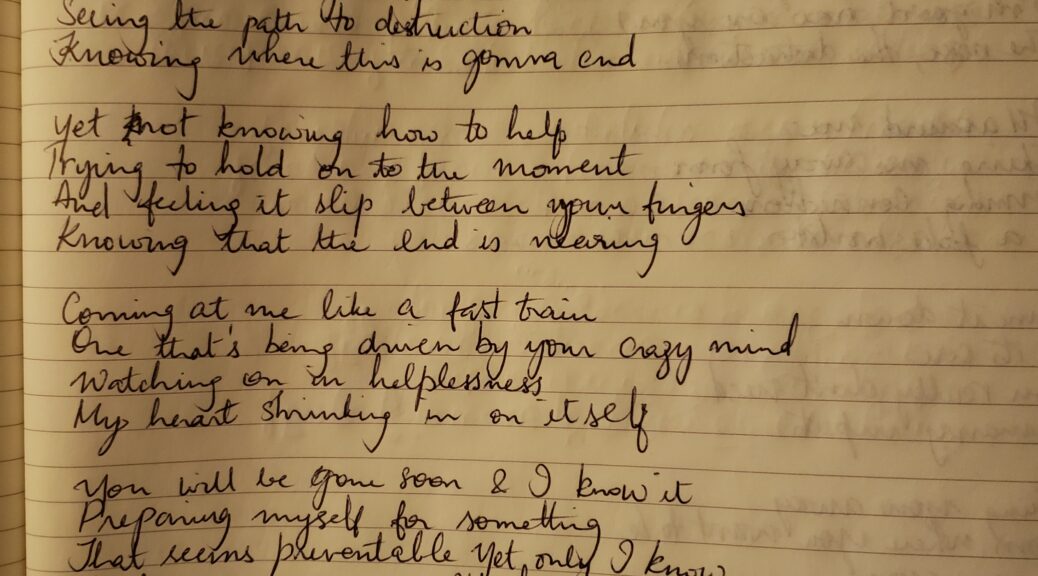 Ever watched the downfall? Knowing exactly how to prevent it. Yet feeling so helpless.

You will be gone soon and I know it
Preparing myself for something
that seems preventable, yet only I know
If there was a way, I’d have done it

I love going through my scribble book. Most of the writings are driven by a muse. And often times when I go back and read it months later, I don’t remember what prompted the writing. But I’m always caught by a certain pun or a certain play of words.

In this particular one, what stood out to me were the lines:

“Preparing myself for something
that seems so preventable, yet only I know
If there was a way, I’d have done it”.

It feels very raw to me.

There is a bit of defensiveness there. Especially the bit that says “that seems so preventable”.

“Seems” indicates the subject (me?) is concerned what others might think, but wants to tell her side of the story.

How many times have we not judged someone with the question “how could you have not prevented it?? Your situation was so preventable. That was a dumb move on your end”.

Truth is, no one goes into a situation thinking “Alright. I’m going to make a dumb decision today”.

Absolutely not. Whatever decision the person made, they made it wanting the best outcome. They made that decision using their best judgment, using whatever input parameters they had in order to make that decision (the engineer in me talking).

And nobody, absolutely nobody, has the right to judge that decision, if you’re not using those exact same input parameters (it’s like a good unit test. Keep the input parameters the same and you get the same outcome every single time).

Yet often times we are too quick to judge. “If it were me I’d have done it differently”.

Pause for a second. Again, truth is, it wasn’t you or your decision to make. This means, the input parameters are different.

Pause. Pause before you score how someone else handled a particular situation. Because… they worked around their parameters. And whatever decision was made, made sense for them; for the time. And that is the right decision. No matter what.

I would even take it a step further and say – don’t be afraid to make that decision thinking it might be the wrong decision. If you think it is the right decision, move right on ahead. You are working with your input parameters. And only you have the right to decide whether it is right or wrong for you.

And if you’re worried that a future version of you might not agree with the decision your current version made, well…. guess what? We are changing every day. I don’t think you will ever get 100% agreement from ALL future versions of yourself.

So go on. If you think it’s right. It’s right for you today.